In ForecastCycles there are two types of strategies linked to Halloween effect:

The Halloween effect is a market-timing strategy based on the hypothesis that stocks perform better between Nov.1st (Halloween) and Apr.30, than from May to the end of October. The strategy states that it is prudent to buy stocks in November, hold them through the winter months, then sell in April, while investing in other asset classes from May through October. Some who subscribe to this tactic say not to invest at all during the summer months.

Many believe that the notion of abandoning stocks in May of each year has its origins in the United Kingdom, where the privileged class would leave London and head to their country estates for the summer, largely ignoring their investment portfolios, only to return in September. Those who subscribe to this notion would likely expect that it is common for salesmen, traders, brokers, equity analysts, and others in the investment community to leave their metropolitan financial centers in summer in favor of oases like the Hamptons in New York, Nantucket in Massachusetts, and their equivalents elsewhere.

Plastun et al. analyzed in 2019, the historical evolution of the Halloween effect in developed markets and they found that it is still profitable: 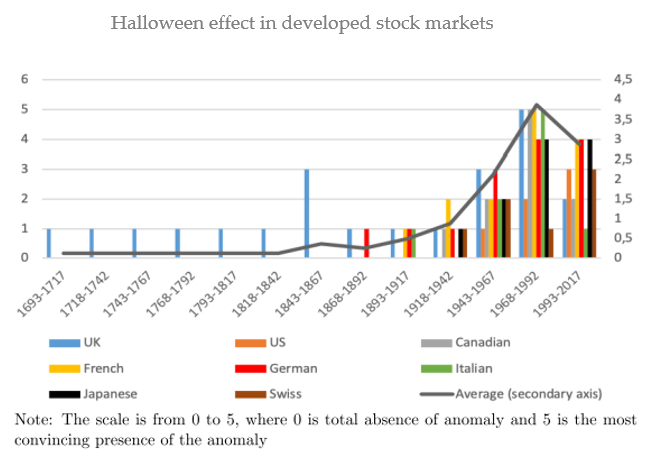 They used the test statistics to determine the presence of the Halloween effect in US stock market. They get insignificant t-values from 1791 to 1940, instead from 1940 to 2015 the results are significant.

Another group of research , checked the strategy of combining Halloween effect to the moving average and the turn of the month effects:

“We study the beneﬁts of trading based on combinations of three of the best-known effects: the moving average rule, the turn of the month effect, and the Halloween effect. We show that the rules can be combined effectively, giving signiﬁcant levels of returns predictability with low risk and offering the possibility of proﬁtable trading.”

In the table above, ‘Y’ means that a filter is active, while ‘YYY-NNN’ indicates a long-short strategy. Results show how the application of the filters improved the performance of a hypothetic Dow Jones trading strategy. In particular, most significant results (p-value near to 0) are given by three strategy, the first is the one that applies of all three filters (YYY), the second applies two of the three filters (YNY: MA (1,200) and Turn of the month), and finally, the best result in terms of mean return is given by the long-short strategy (YYY-NNN).

To trade automatically this anomaly, you can purchase the "HAL Expert Advisor". The Expert Advisor needs the "Main EA and libraries" to work. If you have an active ForecastCycles membership, contact us to get 20% discount.

The list of the anomalies available on Forecastcycles: Halloween effect (HAL and HAL_others): also known as “Sell in May and go away” is a market-timing strategy based on the hypothesis that stocks